👋 Welcome Gophers! In this tutorial, we are going to be taking a look at how you can leverage GitHub actions for fame and fortune within your own Go projects!

Specifically, we are going to be taking a look at how you can build your own GitHub actions by starting off with a "Hello World" example and then ramping it up to more useful actions such as code linting and test coverage reporting!

This tutorial is also available in video format!

🚀 What are GitHub Actions?

GitHub actions have just recently become generally available to everyone with a repository on GitHub.

They are an incredibly versatile tool that allows us to trigger code off the back of any changes pushed to our project’s branches. This is awesome as it allows us as Go developers to programmatically trigger anything we need off the back of a commit to master.

For example, whenever I make a change to the master branch of the repository for this website, GitHub actions automatically run through a series of jobs that build, and deploy the website into production as well as running through a number of checks to see if there are any broken links on the site and validating that the site is at least meeting the basic requirements around accessibility thanks to a lighthouse report generated.

Let’s start off by defining a simple GitHub action for one of our Go projects.

In this action, which we’ve called Simple Job. We have set this up so that every time you push a change to the master branch of your project, it will trigger the Hello job!

Within the definition of this Hello job, we have specified that we want this job to run on a ubuntu-18.04 image and we’ve defined the series of steps we want to run through.

In this case, we have just defined 1 solitary step in this job which we’ve called Hello World!. You’ll see that within this step we have defined what we are going to run, which in this case simply prints out Hello World!

Now that we have a basic handle on building our own GitHub actions for our project, let’s take it a step further and start defining some actions that will be genuinely useful to us as maintainers of Go projects.

Let’s start by defining an action that, when a pull request comes in to our project, it will automatically lint the incoming code and validate that it meets our project’s standards!

Let’s start by creating a new workflow file within our project called .github/workflows/lint.yml. We’ll be defining our action within this file:

Once you have this lint.yml file update, let’s git add, git commit, and git push this to our project repository.

Upon pushing this up to our GitHub repository, we should be able to see the workflow running within the actions tab of our repo.

If you are working on a project that you have to test across multiple versions of Go or across multiple different architectures, then you can utilize the power of actions to aide you in your quest!

Let’s build in a simple GitHub action that will build our project across a variety of different Go versions now:

Let’s try commit this and trigger this workflow now within our project.

You should be able to see the 9 jobs defined within our 3x3 matrix running and you should see the results of their execution like so: 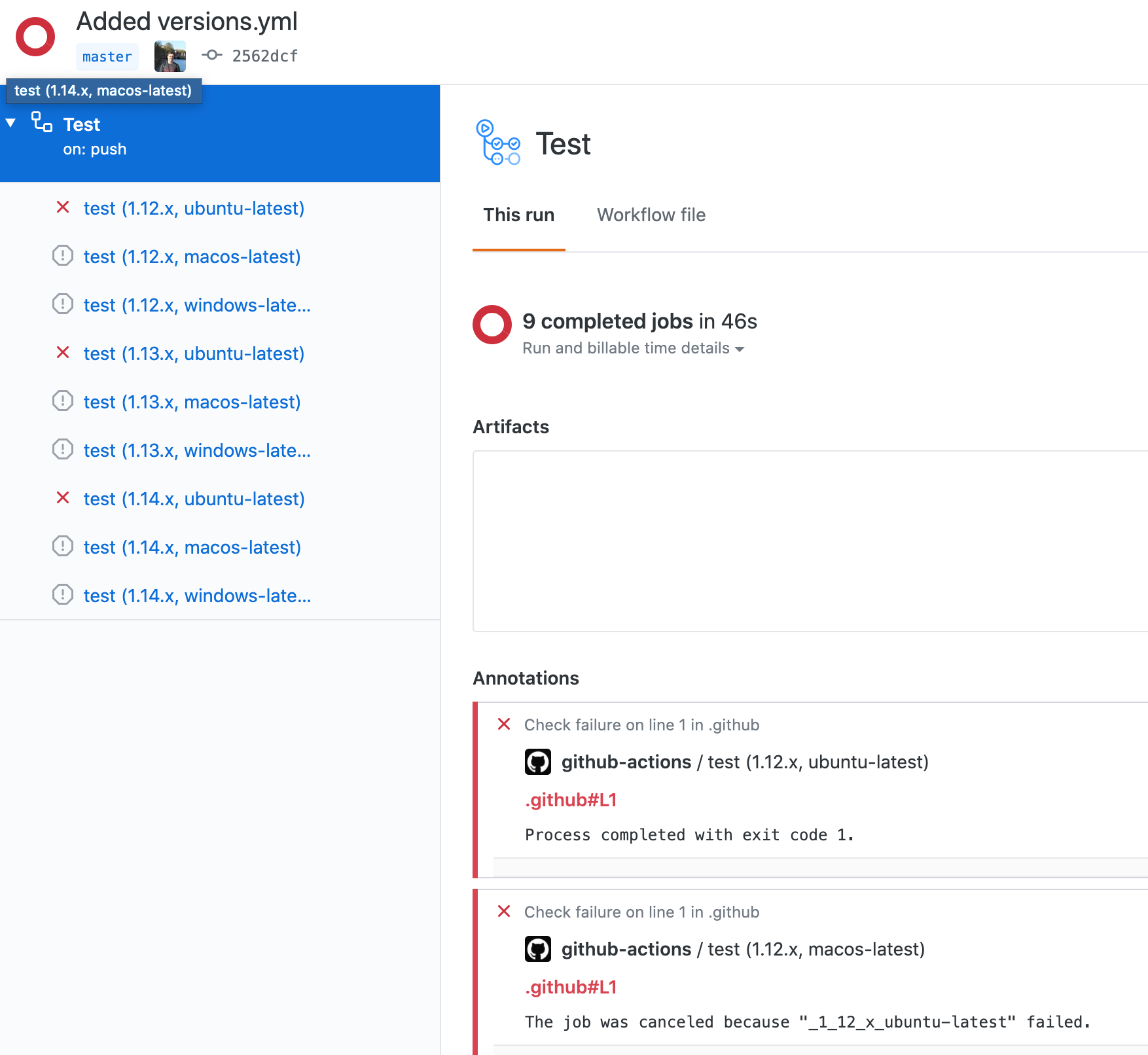 Obviously I have a fair bit of work to do in this example project to get the tests passing across all versions and platforms, however, I have removed the manual toil needed to run these myself.

The final action we are going to cover in this tutorial is a publish action which will take our committed code and then build a docker image from the Dockerfile within our project before then publishing it to Docker Hub.

In this task, we’ll have to figure out a way expose secrets to our task in a secure way. Thankfully, GitHub makes this easy for us and allows us to add secrets to each individual repository through the settings tab.

Navigate to the settings tab and then open Secrets and click the New secret button. We then need to add the DOCKER_USERNAME and DOCKER_PASSWORD secrets with your own Docker Hub credentials.

With these in place, we can then pass them through to actions using ${{ secrets.VARIABLE_NAME }}.

Now that we’ve covered passing secrets securely, we can now attempt to use these secrets with a pre-defined marketplace action that handles most of the complexity of publishing to Docker Hub for us.

We’ll be using elgohr/Publish-Docker-Github-Action@master in order to publish our image. It’s worthwhile checking out the marketplace to see the full list of arguments this takes in, but for now we’ll just be using the name of the image we want to publish as well as our username and password combo:

If we commit this with our secrets set within our repository, we should see that our image is automatically published up to Docker Hub for us using the username and password combination.

Perfect! We now have a fully functional publish action which will build and publish our Docker image for us up to Docker Hub from which we can now deploy to our hearts content!

Awesome! 😎 So, in this tutorial, we have successfully created a number of very useful GitHub actions around one of our Go GitHub repositories!

This is by no means an exhaustive list, but hopefully it highlights just how powerful GitHub actions can be when added to your own projects!

If you found this article useful, you may also like some of these other articles on the site: