🚀 Get 25% off access to all my premium courses - use discount code FUNCMAIN at checkout - view the pricing page now!

The first step to implementing any machine learning algorithm with scikit-learn is data preparation. Scikit-learn comes with a set of constraints to implementation. The dataset that we will be using is based on mobile payments and is found on the world’s most popular competitive machine learning website – Kaggle. You can download the dataset from:  https://www.kaggle.com/ntnu-testimon/paysim1.

The fundamental goal of this dataset is to predict whether a mobile transaction is fraudulent. In order to do this, we need to first have a brief understanding of the contents of our data. In order to explore the dataset, we will use the pandas package in Python. You can install pandas using the following code in Terminal (macOS/Linux) or PowerShell (Windows):

Pandas can be installed on Windows machines in an Anaconda Prompt using the following code:

We can now read in the dataset into our Jupyter Notebook using the following code:

This produces an output as illustrated in the following screenshot:

Dropping features that are redundant

From the dataset seen previously, there are a few columns that are redundant to the machine learning process:

We can drop these features from the dataset using the following code:

Reducing the size of the data

The dataset that we are working with contains over 6 million rows of data. Most machine learning algorithms will take a large amount of time to work with a dataset of this size. In order to make our execution time quicker, we will reduce the size of the dataset to 20,000 rows. We can do this using the following code:

This results in a dataframe with a little over 20,000 rows, over which we can now execute our algorithms relatively quickly.

One of the main constraints of scikit-learn is that you cannot implement the machine learning algorithms on columns that are categorical in nature. For example, the type column in our dataset has five categories:

These categories will have to be encoded into numbers that scikit-learn can make sense of. In order to do this, we have to implement a two-step process. The first step is to convert each category into a number: CASH-IN = 0, CASH-OUT = 1, DEBIT = 2, PAYMENT = 3, TRANSFER = 4. We can do this using the following code:

First, the code coverts the type column to a categorical feature. We then use LabelEncoder() in order to initialize an integer encoder object that is called type_encode. Finally, we apply the fit_transform method on the type column in order to convert each category into a number.

Broadly speaking, there are two types of categorical variables:

In the code, we first create a one-hot encoding object called type_one_hot. We then transform the type column into one-hot encoded columns using the fit_transform method.

We have five categories that are represented by integers 0 to 4. Each of these five categories will now get its own column. Therefore, we create five columns called type_0, type_1, type_2, type_3, and type_4. Each of these five columns is represented by two values: 1, which indicates the presence of that category, and 0, which indicates the absence of that category.

This information is stored in the ohe_variable. Since this variable holds the five columns, we will join this to the original dataframe using the concat method from pandas.

The ordinal type column is then dropped from the dataframe as this column is now redundant post one hot encoding. The final dataframe now looks like this:

Another constraint with scikit-learn is that it cannot handle data with missing values. Therefore, we must check whether our dataset has any missing values in any of the columns to begin with. We can do this using the following code:

This produces this output: 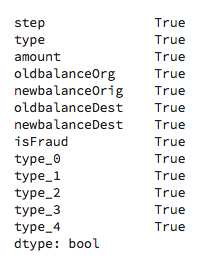 Here we note that every column has some amount of missing values. Missing values can be handled in a variety of ways, such as the following:

We can do this using the following code:

We now have a dataset that is ready for machine learning with scikit-learn. You can also export this dataset as a .csv file and store it in the same directory that you are working in with the Jupyter Notebook using the following code:

This will create a .csv file of this dataset in the directory that you are working in, which you can load into the notebook again using pandas.

If you found this article interesting, you can explore Machine Learning with scikit-learn Quick Start Guide to deploy supervised and unsupervised machine learning algorithms using scikit-learn to perform classification, regression, and clustering.

Setting Up your Development Environment for Building a Genetic Adversarial Network