January Sales! - 25% off premium subscriptions when you use coupon code: JAN2022 - View Pricing

Setting Up your Development Environment for Building a Genetic Adversarial Network

Let’s lay out the requirements for the equipment you’ll need:

First and foremost, the GPU is a requirement. Although these algorithms can technically train on a CPU, it could take days in some cases for a single model to converge. It can take a GPU a day or more to converge in some instances. GPUs offer an immense computational power increase over CPUs and are hence a necessity. It’s easy today to find a laptop with a 1,060 or better in it for around $900.

There are a few common steps that will need to be for each new developer—these steps will be addressed in the following subsections.

Installing the NVIDIA driver for your GPU

Installing the correct NVIDIA driver is incredibly important. A key component  is the usage of CUDA in TensorFlow. NVIDIA has this description for the CUDA library:

“CUDA® is a parallel computing platform and programming model developed by NVIDIA for general computing on graphical processing units (GPUs). With CUDA, developers are able to dramatically speed up computing applications by harnessing the power of GPUs.” (Source: https://developer.nvidia.com/cuda-zone).

Using CUDA, TensorFlow can achieve drastic speedups in terms of processing power. In order to make this happen, we need to have a certain type of GPU and driver installed on the host machine.

So, let’s start installing the things that we require.

You can run the nvidia-smi command to know which version of driver is installed on your system.

The following is an example of the nvidia-smi command:

The output of nvidia-smi will show your GPU any processes you have running and the current driver version installed.

The following is an Nvidia-Docker hierarchy that you need to understand before installing it: 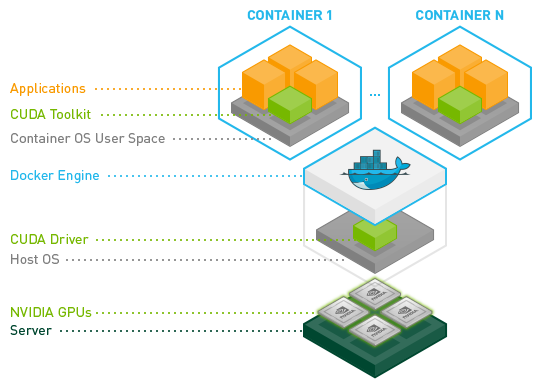 What is Docker? According to the Docker website, the keyword for it is lightweight. Docker containers running on a single machine share that machine’s operating system kernel; they start instantly and use less compute and RAM. Images are constructed from filesystem layers and share common files (source: https://www.docker.com/what-container).

Essentially, Docker allows us to create a lightweight Virtual Machine (VM) in a container where we can house all of our applications and guarantee that the environment is going to be the same every time we enter this container.

NVIDIA-Docker goes one step further and provides the appropriate linkage for our Docker containers to be able to interact with a GPU. This is a critical piece for our development environment. Once we have NVIDIA-Docker set up, the rest of the environment is fairly straightforward to integrate.

The installation is easy. It’s recommended that you visit the website and ensure that the directions haven’t changed since publication: https://github.com/NVIDIA/nvidia-docker. At this time, NVIDIA-Docker2 is the latest version of development. When you install the NVIDIA-Docker2 system with these steps, it should allow you to upgrade periodically with  sudo apt upgrade.

When going to the website, you should see a set of instructions similar to this one:

Note - The instructions source is found at: https://github.com/NVIDIA/nvidia-docker.

Now, let’s go over each of these commands in detail.

Purging all older versions of Docker

After completing this command, the next step is to use the purge method in apt-get to remove any previous installations of NVIDIA-Docker from your previous work:

After adding the key, add the repo to the sources that apt-get can pull from when installing packages:

Finally, an apt-get update allows apt-get to update its list of installable packages. Since we just added a new repository, the update will allow us to install the NVIDIA-Docker repository in the next step:

Now we move on to the next step.

Installing NVIDIA-Docker2 and reloading the daemon

This is the point you’ve been waiting for! (Probably not.) Use apt-get to install the nvidia-docker2 package:

Next, use pkill to restart the Docker daemon after the installation:

Now, you’re ready for a simple test of the installation.

Testing nvidia-smi through the Docker container

This is the moment of truth—if this command runs correctly, you should see the nvidia-smi output that you see on your machine outside of the container: docker run –runtime=nvidia –rm nvidia/cuda nvidia-smi Your output should look similar to the nvidia-smi command example we showed in the Installing NVIDIA driver for your GPU section:

Building a container for development

What’s a container? A container is Docker’s name for a VM with a certain configuration of operating system and software. Docker containers allow you the flexibility to have a different development environment for every new project with minimal downtime.

This section will simply explain a small example Dockerfile to give you an idea of how powerful these particular tools are. Here’s the example we are going to cover:

This is the basics of how you will build a basic image, called base_image.

Note - Here are a few topics to cover in case you are curious about how the RUN commands work in Dockerfiles: https://docs.docker.com/engine/reference/run/.

If you enjoyed reading this article and are curious about building GANs, you can explore Generative Adversarial Networks Cookbook. With over 100 recipes to build generative models using Python, TensorFlow, and Keras, Generative Adversarial Networks Cookbook is a must-read for data scientists, machine learning developers, and deep learning practitioners looking for a quick reference to tackle challenges and tasks in the GAN domain.