✍️ Publish on TutorialEdge! You can now sign-up and write your own articles for the Go community - Announcement Post 🎉

How to Conduct ARP Spoofing for MITM Attacks - Tutorial

A man-in-the-middle (MITM) attack is one of the most dangerous and effective attacks that you can carry out in a network. You can only perform it once you’re connected to the network.

It can be used to redirect the flow of packets from any client to your device. This means that any packet that is sent to or from the client will have to go through your device, and since you know the password and the key to the network, you’ll be able to read those packets. This attack is so effective because it’s very hard to protect against.

MITM attack works using a technique called ARP poisoning or ARP spoofing. This is done by exploiting the two security issues. The first one is that each ARP request or response is trusted. You can just tell any device that’s on your network that you’re the router and the device will trust you.

The second security issue is that the clients can accept responses even if they didn’t send a request. So, for example, when a device connects to the network, the first thing it will ask is, “Who is the router?” And then the router will send a response saying, “I am the router.”

Now, you can just send a response without the device asking who the router is. You can simply tell the device that you’re the router, and because the devices trust anyone, they will trust you and start sending packets instead of sending the packets to the router.

Now, check out how to run an actual ARP poisoning attack, redirect the flow of packets, and make it flow through your device. This section will talk about a tool called arpspoof, which is part of a suite called dsniff.

The dsniff suite contains a number of programs that can be used to launch MITM attacks. You’ll see how to use it to carry out ARP poisoning, which redirects the flow of packets through your device. The arpspoof tool is old but still works, and because it’s so simple, it’s been ported to Android, iOS, and other smaller operating systems.

To get started, connect to the target network using the arpspoof tool. Here, it’s going to be arpspoof -i, as you need to choose your internet card (virtual card), which is eth0. Now insert the target IP address. Here, your target is a Windows device, with IP, 10.0.2.5.

By running the above commands you’ll fool the access point and the client, and you’ll let the packets flow through your device. Since Windows is the target device, you’ll use the ARP table. So, if you run the arp -a command in the Windows machine, it will show you the ARP table. You can see in the following screenshot that the IP address for the access point is 10.0.2.1 and its MAC address is 52-54-00-12-35-00. This is stored in the ARP table:

Now, once you perform the attack, you’ll see that the MAC address 08-00-27-0b-91-66 for the target access point will change and it will be the attacker’s MAC address:

This will place your attacker device in the middle of the connection and you’ll be able to read the packets, modify them, or drop them.

In this section, you’ll use a tool called MITMf, and as the name suggests, this tool allows you to run a number of MITM attacks. You’ll run the tool, see how to use it, and then do a basic ARP poisoning attack, exactly like in the previous section.

You’ll also use your Ethernet internal virtual cards instead of the Wi-Fi card so that you can actually run these attacks against Wi-Fi or wired networks. Connect it to the network and the target network, and then perform the attack like you did with arpspoof. Alternatively, you can do it using an Ethernet virtual card.

If you do ifconfig just to see your interfaces, you’ll see that you have the eth0 card connected to the internal network at 10.0.2.15: 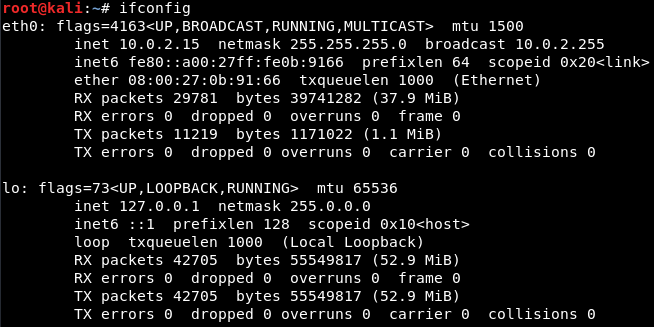 Now, run the ARP poisoning attack and see whether the MAC address changes and whether you can become the MITM.

To use MITMf, you’ll have to insert a command and then tell it to perform ARP poisoning. Next, give it the gateway (the IP of the router), the IP of your target, and the interface. Use the following command to get started:

If you don’t specify a target, it will default the entire network and subnet. The interface specifies your virtual interface, but you can specify your wireless card if it’s connected to the wireless network. So, hit Enter to get the tool running: 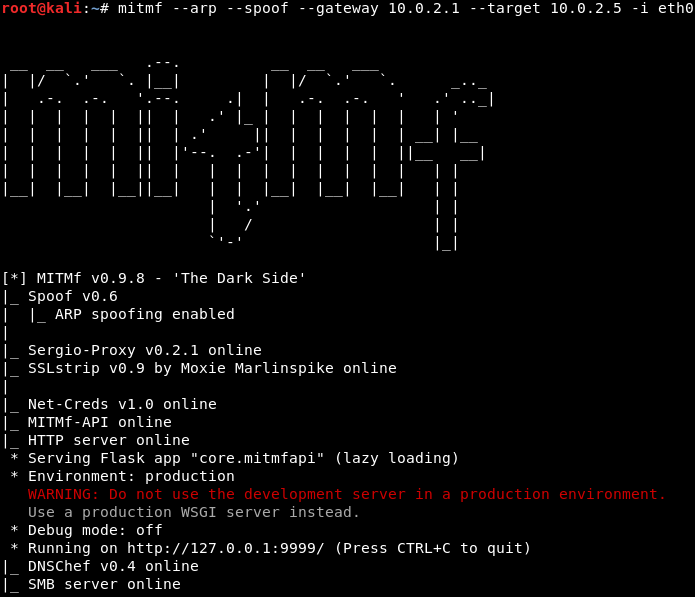 Now go to the Windows machine, run arp -a, and see whether you’ve managed to become the center of the connection. In the next screenshot, you can see that the MAC address has changed from 35-00 to 91-66, and it is the same MAC address as the virtual interface that you have in Kali, so it ends with 91-66:

So, this means that you’re the MITM at the moment, and the tool automatically starts a sniffer for you. So, instead of arpspoof, which only places you in the middle, this tool actually starts a sniffer, which captures the data that is sent by the devices in your network.

Now go to an HTTP website to see how to capture a username and password. On a Windows machine, go to a website called Hack.me; then, go to the login page to log into an account while the MITM attack is running.

Enter the Email Address as zaid@isecur1ty.org and 123456 as Password. Now, if you go back to the MITMf console, you’ll see that the username and password have been captured:

So, basically, you can capture any username and password that is entered in the computer that you’re ARP spoofing. You can also see all the URLs that the person has requested. So, here, you can see that they requested me.hack.me.

If you found this article interesting, you can explore Zaid Sabih’s Learn Ethical Hacking from Scratch to learn how to hack systems like black hat hackers and secure them like security experts. Learn Ethical Hacking from Scratch starts with the basics of ethical hacking, moves on to showing how to practice hacking safely and legally, and then teaches how to detect, prevent, and secure systems from attacks.